Cycle parking at the Tate Modern 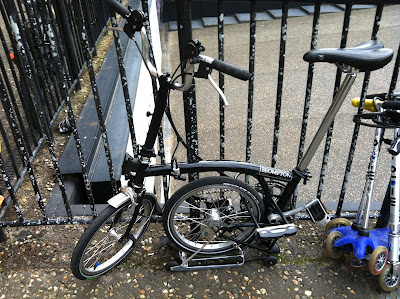 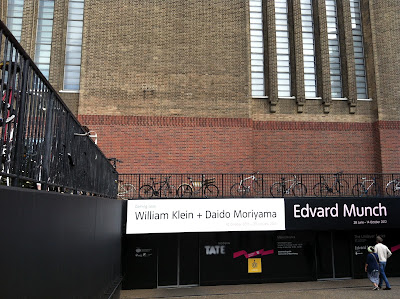 I dropped into the Tate Modern bookshop after going to see work at the Bankside Gallery next door. Because the British Museum has now stopped accepting heavy luggage in the cloak room I was worried that the same rule would now apply at the Tate. But not so. As I was locking the Brompton a helpful security guard came over to tell me that I could leave it in the cloak room. He even called the cloak room to confirm but couldn’t get through. I decided to leave the bike as it was already locked and I wasn’t staying long. I did go to the cloak room to ask about leaving the bike in the future and they said they would accept folding bikes, the attendant even told me to go and bring the bike. The Tate is bike friendly. They allow cyclists to chain their bikes on the railings just outside and don’t stop you from cycling on their land. The British Museum does have cycle stands but at a distance from the building, and on the last occasion when I cycled to the parking area a guard came over to politely tell me that I wasn’t allowed to do this.

aedan said…
I was in London a few weeks ago and left a Brompton with the cloakroom of the Imperial War Museum.
29 September 2012 at 19:19

Adam Edwards said…
The British Library are happy to have Bromptons chained up in their left luggage room, which is really handy.

PS: As a Brompton fan, can I recommend A2B.org.uk to you? They do a fab little magazine with lots of folding news and other things on a general eco friendly cycling line. Also, noting you are in Woolwich, if you fancy a day out in Kent, have you tried going to Northfleet, a quick Brompton ride to Ebbsfleet and then the HiSpeed Javelin trains to places like Canterbury, Dover, Margate (Tate), or Folkestone? Very fast way eaat.
30 September 2012 at 13:05

Cycling in Heels said…
Thanks for reminding me about A2B. I haven't looked at their site in a while but before I got the Brompton 4.5 years ago I read all their reviews on folding bikes.

ACL said…
I was just going to the Tate today, and googled 'Tate Modern Brompton' to find out if I could bring the bike and your post came up first on the list! Seriously, G, we must 'stop meeting like this'!
9 October 2012 at 14:45

Grace Black said…
Apologies to the reader who left a comment this pm with a link to a Guardian article. The comment seems to have disappeared as I was publishing it!
16 October 2012 at 23:47 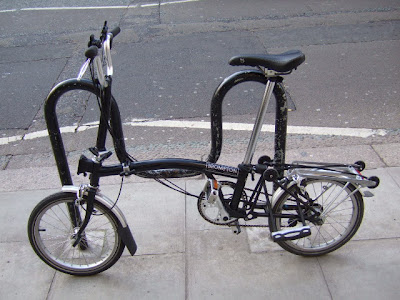 While I love the fact I can take my Brompton everywhere at times it is just not convenient and so I also carry a lock. The downside is the stronger the lock the heavier it is. But only a problem if you use a messenger bag rather than a Brompton bag as you are carrying that extra weight on your back. I use an Abus Varedo D lock that is 300mm in length. It does come smaller but I got this size to ensure that it will get around the bike wheel and a post. The lock slips into the Timbuk 2 messenger bag and off I go. I choose this lock because it has a security rating and while no lock is unbreakable my insurance company would not be happy if I didn’t attempt to have adequate protection for the Brompton. There are locks with a higher rating but these are too heavy to carry around. I always lock my bike to a metal post. I avoid those tiny D shaped wheel park posts that are still around some public buildings. They only allow you to lock the wheel to the post. They also don’t s 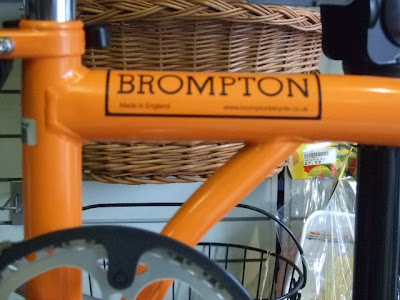 What colour is your Brompton?

I got this comment from Richard and I decided to answer it in a post. 'Found your site after searching for 'yellow Brompton' (even if yours aint) So what do you think - if you did it all again would you still get a black model? Just about to cyclescheme one and am choosing between red, black and yellow ....' What to do what to do. If I was doing it again I would go for another colour but don’t ask me what colour as everytime I see a Brompton that becomes my favourite colour. I saw a red one last week and I wanted a red one until I saw this soft cream colour this afternoon. Yellow is a rare colour in London and I am always on the look out for Brompton riders on yellow bikes. The last time I saw one was outside Waterstones in Garrick Street on a rainy day over a year ago and it stood out like a ray of sunshine. The paint work was gloss and as you know the paint work on new Bromptons is now matt. I think you go with your heart but more important is make sure you